Not too much crowded, nor scarcely populated, Kinnaur is a quaint and offbeat place in Himachal Pradesh to explore. Famous for its apple orchards, this district has many hamlets dotting along its steep slopes with standing tall trees on the mountain ranges.

It is located about 235 km from Shimla. The way to the Kinnaur valley has one of the most beautiful terrains that provides a warmth to the inner soul admiring the artisanship of the incumbent creator.

District is surrounded by 3 main ranges, Zanskar, Dhauladhar and Himalyas. Kinnaur district has many places to explore.  Some of them are…

In Kinnaur district, Sangla is one of the most enticing hamlet to visit and explore. Houses in the village seems to be stacked on one another as they are made onto the steps cut on the slopes of the mountains. This village is enclosed by lofty Raldang Peaks, having thick forest at its lower terrain, which gets covered by snow till the peaks are reached. Located at the bank of Baspa River, this place offers an out of the world scenic beauty that whispers calmness. 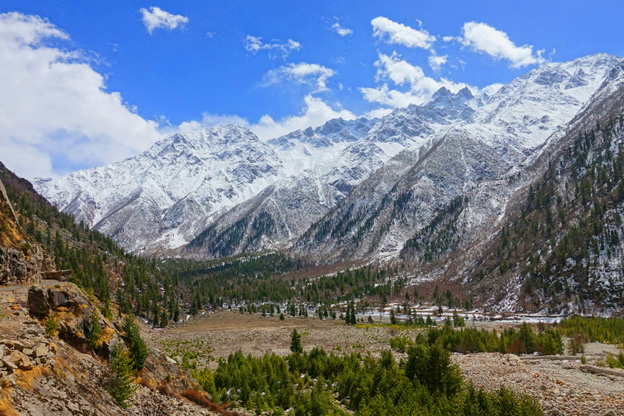 How to reach? It can be reached by way from Shimla via Rampur.

What not miss?? Camping in apple orchids.

Nestled in Sutlej Valley, above Reckong Peo, Kalpa is a spellbinding village in Kinnaur District. This village is inhabited by the Kinnauri people who are influenced by both Buddhism and Hinduism. Blend of both cultures could be seen in the temples in village having idols of both culture’s god and goddesses. 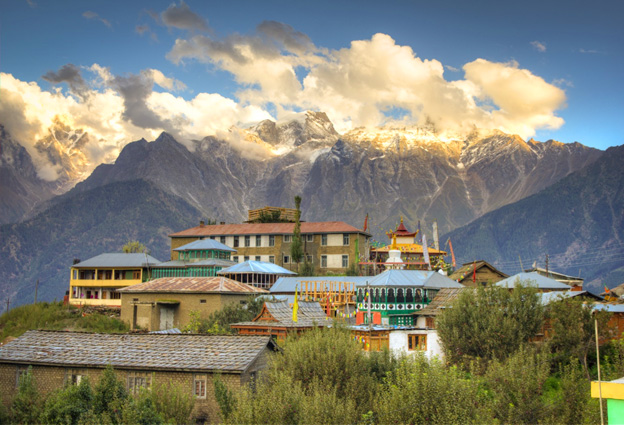 How to reach…?  It is about 220 km from Shimla via Reckong Peo

Altough, its name is little offbeat and weird, but it is a place having scintillating beauty that could not be forgotten once you reach it. 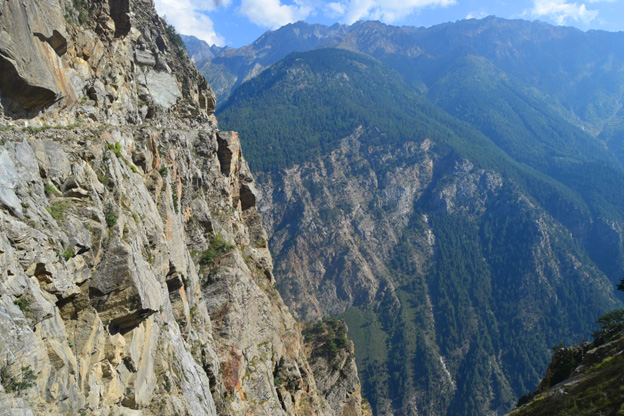 Around 3 km from Kalpa village, this point is located, has vertical slopes which seems unreal and could be seen only in sci-fi movies. It appeals to be made something created by animation which got real somehow. Absolutely, ethereal.

Kalpa welcomes you with an enthralling view of Kinnaur Kailash, or Kinner Kailash, is popularly called as mountain of Lord Shiva. At a boasting height of 4800 m, monolithic Shiv ling has been enshrined and still stands there is imperatively sacred among Hindus as well as among Buddhists. 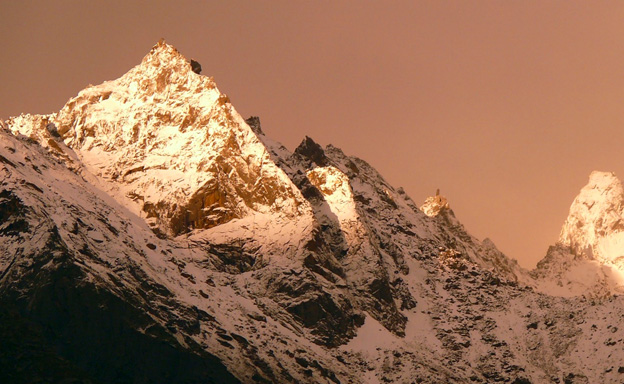 People observe their proclivity to the holiness by doing parikrama from Morang till Kalpa. The peaks are covered in snow provides the finest picture-perfect view of the lofty mountains.

At a minimal distance of around 8 km from Kalpa another hamlet comes, Roghi Village. Like any other picturesque natural beauty of Kinnaur district’s hamlets, this place is also blessed with abundance of same. Houses showcasing ethnic culture of Kinnaur are constructed over the mountain slopes surrounded by flocks of apple and apricot trees. 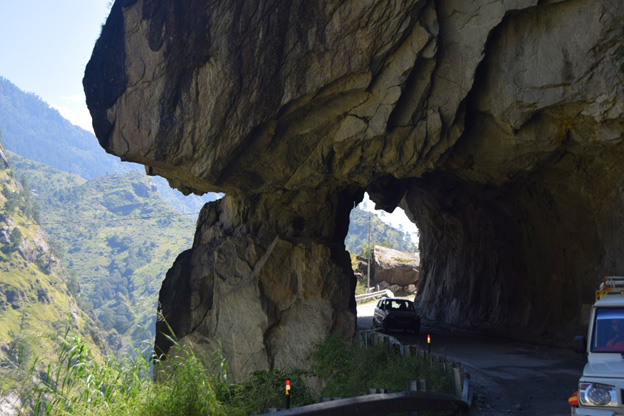 Roghi is well known for its treacherous path along the side of a cliff. But adventure and peace seekers take the chance to reach this worthwhile destination.

Another gem in Kinnaur to explore and visit is Kothi village situated in tehsil Kalpa. This village is near to Kalpa, little below Reckong Peo. Kinnaur kailash at its background gives a heavenly view to the pristine landscapes of the village. 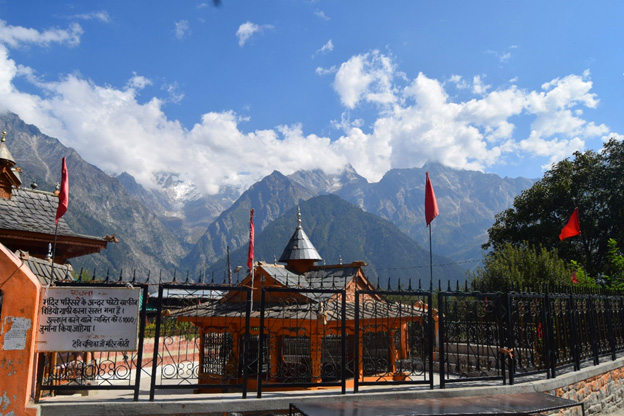 Goddess Shuwang Chandika as the most powerful by the locals of the village and has a temple dedicated to her where goddess is worshipped with a great belief.

28 km from Sangla is located a beautiful small village is named as Chitkul, is apparently the last village of North India where anyone could go without a permit.

Located at the banks of hurtling river Baspa is an adventurous as well all scenic place to go in Kinnaur District. The stretch from Rakhsam to Chitkul is purely a deed to the eyes and soul due its picturesque views having snow laden peaks, shimmering river flowing and antique wooden houses on the slopes of mountains.

How to reach? It is about 113 Km from Shimla

Nako lake is somewhat untouched tourist spot located in Pooh district of Kinnaur. This beautiful like is surrounded by willows and Poplar trees, which are surrounded by lofty mountains, make it a soothing view to stare at. 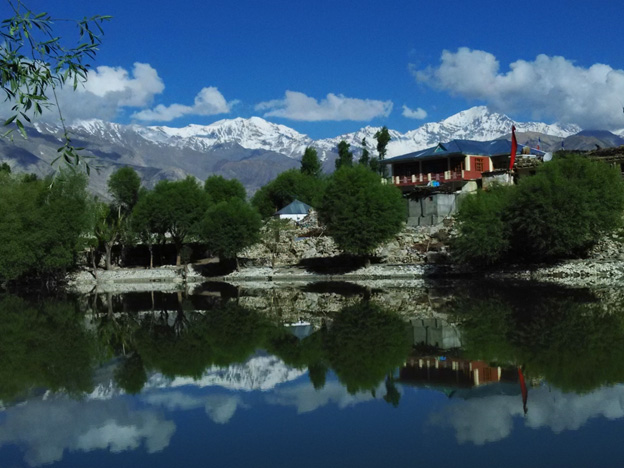 Near the lake there are 4 Tibetian temples depicting the culture of Kinnaur district. Also, it is said that Saint Padmasambhava, meditated in some caves near the temple and gave sermons to his followers.

Thing to remember: A permit is required to visit Nako village and the lake. So, don’t foget to get it.

On the way to Chitkul from Sangla, a sparsely populated hamlet is located known as Rakcham Village. Nestled on the left bank of river Basa, this village is place for peace dwellers and peace finders. Village has no mobile connectivity or any kind of so-called luxuries of cities. 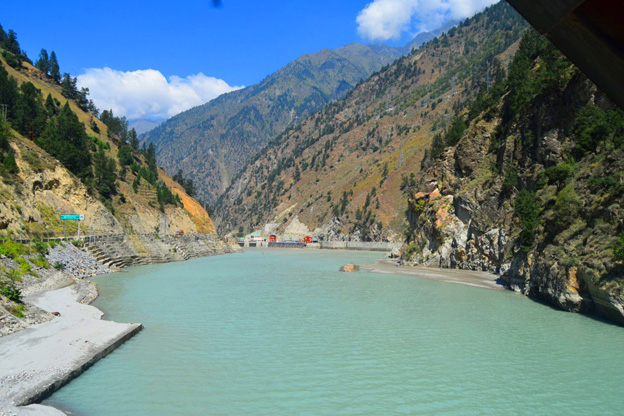 A simple living well defines the aesthetics of the people. What it possesses is numerous natural beauty which lures tourists to stay here disconnected from mobile network but connected to nature’s network.

…So, plan your trip to offbeat enthralling Kinnaur. And do share this blog with others…

Yoga and Meditation in Himachal Pradesh

Connect with Visit To Himachal to make it for you now.